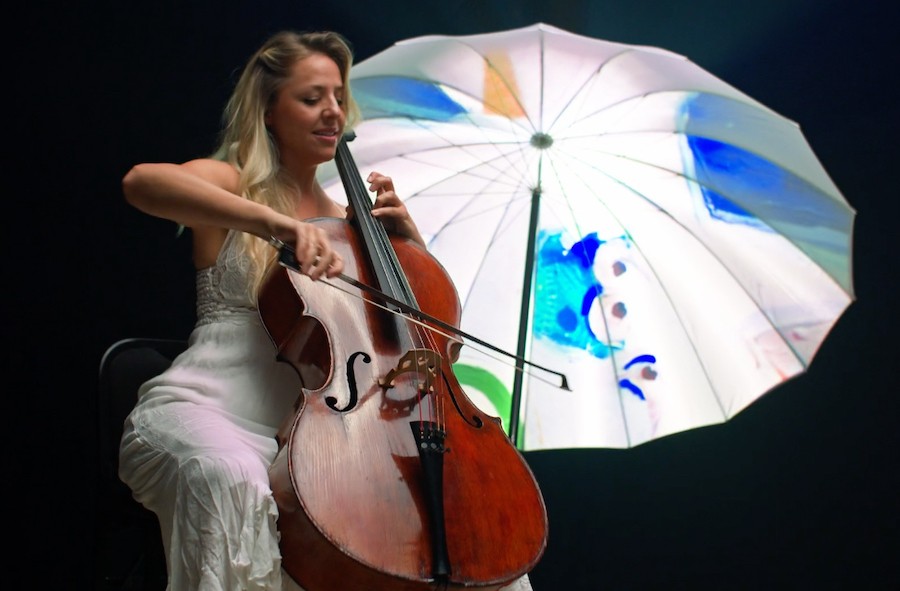 What do you get when you take Bach’s Cello Suite No. 1 to the beach, interpret the parasols planted in the sand through the eye of a painter, then refract those parasols through a kaleidoscope of spotlights and lights? floor-to-ceiling screens? On February 18 and 19, a handful of Sarasota art lovers will try to answer that impossible question as a collaboration of creators in their best B(e)ACH DAY returns.

The creatives in question are Ringling College painter and chief curator Tim Jaeger, Sarasota Orchestra principal cellist Natalie Helm, and a committee of technical video production assistants from Storyvox. Together, the three parties have created an immersive exhibition of sights and sounds that blend classical forms into a postmodern dreamscape.

“I really enjoyed my Beach Umbrella series and it was very well received,” Jaeger says of his colorful expressionist seaside scenes, “but I wanted to see what else I could do with it.” To that end, Jaeger crossed paths with another artist from another medium in a similar quest for new pastures. That artist was cellist Natalie Helm.

During the pandemic, Helm began to work hard at home in an attempt to upgrade his already impeccable technique. Along the way, she too wondered what else she could do from a performance standpoint. “Bach’s six cello suites are something every cellist wants to accomplish,” says Helm, “and I decided during quarantine that it was the season for it, and I knew I wanted to collaborate with a different artist. on each sequel.” His Bach Immersion series of events has already resulted in a successful collaboration with Sarasota Contemporary Dance, where a bit of theatre, dance and artifice gave his early Bach suites a unique context. But B(e)ACH DAY takes the context to a whole new level.

The glue that holds the whole collaboration together is the visual magic of Storyvox. Known for its brand-centric cinematic video production work that borders on documentary filmmaking, the company uses its “extended reality” studios in the Rosemary neighborhood to express its own creativity with projection mapping and other technological magics. . Using Jaeger’s paintings as the main ingredient, Storyvox will project pieces of its Beach Umbrella series onto several umbrellas planted in real sand, while a huge 10-foot-tall screen will show animations of the paintings synchronized with the cello suite. .

“I’ve been trying to explain it to close colleagues for months and it’s still hard to put into words,” says Jaeger. “But I was really inspired by the Van Gogh experience (which is also coming to Sarasota in March) and wanted to see if there were any artists here who could do something on that scale conceptually. It’s more intimate , but I hope it’s a really inspiring experience for people.

The two performance evenings will take place at Storyvox’s XR studio at 1490 Boulevard des Arts in the Rosemary district on February 18 and 19 from 7 to 9 p.m. Although free, the studio only supports limited numbers to maximize the attendee experience and ensure safety.